Herta Stern was born on 1 June 1922 in Burghaun. The town of Burghaun lies between Fulda and Kassel in Germany. In the summer of 1935 father Stern was informed of his imminent arrest. The family left in a hurry for Beuthen and house and yard were sold by his brother-in-law. In 1937 the family moved to Frankfurt am Main.

Herta was the youngest in a family of three children. Her brother Jonas (1916) and sister Mali (1919) fled to the US in 1939. Jonas was arrested after Kristallnacht and taken to Buchenwald camp. He was held there until 9 January 1939. Herta’s father was also arrested during Kristallnacht and taken to Dachau camp. He was imprisoned there until 21 December 1938. Herta’s parents were arrested at the end of 1941 and murdered in Minsk as soon as their transport from Frankfurt arrived.

Herta herself fled Nazi Germany in September 1939 and left for the Netherlands, where she was able to get a place in the Werkdorp. She started to work there as a domestic help. There she met Herbert Tombowsky and after a two-year run-up they decided to get married in 1941. However, as a nineteen-year-old Herta needed permission from her parents to get married and they initially refused. But after Herta’s firm insistence they finally consented. Hoogwoud is where Herbert and Herta got married on 11 October 1941. In April 1942 they had to leave there because of the proclamation of the German occupier that the coastal region had to be made free of Jews.

They moved with a large group of pioneers to Deventer from where they looked for work and a place to live with farmers in the neighbourhood. Herbert and Herta settled with a fairly large group of at least 20 pioneers in Almelo. In September 1942 a number of Werkdorpers in Almelo received a notice to report for a labour camp in Nunspeet. A few of them complied; Herbert and Herta stayed in Almelo and hid.

But at the end of 1942 they decided to return to Amsterdam, where they joined the other Werkdorpers in the youth centre of the Jewish Council. Not safe there either, they found a house for the two of them, but by the end of May 1943 they were rounded up and transported to camp Westerbork. Although they had a ‘sperr’, they too were transported to Theresienstadt at the beginning of April 1944. Six months later they were transported to Auschwitz, still together. They had known each other for five years and had been together for three. Then their paths separated.

Early December 1944 Herbert was put on transport to Gross-Rosen and from there to camp Flossenburg. It was the end of December then. He died there just before liberation as a result of the murderous forced labour he had to perform in the underground weapons factories. His wife Herta lived to see the liberation in Bergen-Belsen, but was so emaciated and weakened by her illness that any help came too late.  She died on 31 May 1945. 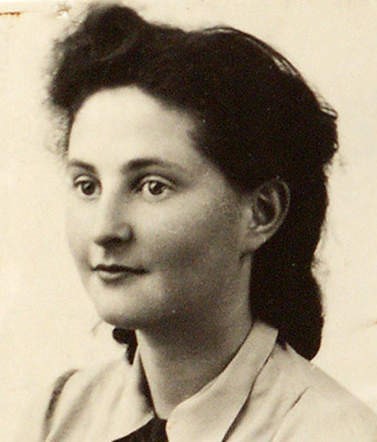