Paul Siegfried was born on 1 January 1912 in Altona, which after 1938 became part of the city of Hamburg. He had an older brother Gerd Victor (1907) and a younger sister Ilse Elisabeth Selma (1916). His father was a merchant.

After the ‘Realschule’, Paul Siegfried trained as an apprentice pastry cook at the Craftsmen’s Night School. Immediately after Hitler’s rise to power in 1933, the family fled to the Netherlands. The family first lived in Rotterdam at Statensingel 40a. They had themselves nationalised as Dutch citizens.

This has consequences for Paul Siegfried. He has to do military service. In June 1934 he is approved after a re-examination – he is nearsighted, has a heart condition and breathing difficulties as a result of a railway accident. He was conscripted in the infantry in Bergen op Zoom on 3 October 1935 and went on leave on 16 May 1936.

In 1935 the Cohen family moved to Amsterdam. His sister Ilse started working as a shorthand typist. From March 1940 she worked for the Jewish Council in the department helping non-Dutch Jews. After some time, she became the secretary of Mr. Cahen and of the financial department. She has a ‘sperr’ based on this position.

Brother Gerd Victor is initially a goods inspector in Amsterdam. He is a sampler of ores and metals in the harbour. From the end of July 1942 he was a checker at the registration department of the Jewish Council in camp Westerbork. Because of this function he has a ‘sperr’.

Paul Siegfried’s father worked for the general department of the Jewish Council but was honorably discharged on 8 April 1943. Just like Paul Siegfried’s mother, he had a ‘sperr’ on the basis of their son Gerd’s position in camp Westerbork. But they too were put on transport. Paul Siegfried’s parents went on 14 September 1943 and were both killed immediately upon arrival. Sister Ilse had already been put on transport to Sobibor in July 1943 and was also killed immediately upon arrival. Brother Gerd, together with his wife Gretchen Nussbaum, went on the penultimate transport in September 1944 to Theresienstadt. Gerd was murdered in Bergen Belsen on 2 February 1945. Gretchen Nussbaum – she lived in the Werkdorp Wieringermeer from 8 March 1939 to 20 March 1941 – survived the war and in the autumn of 1946 left for the USA. In May 1948 she returned to Amsterdam and died there.

Fate of Paul Siegfried and Gerda

Paul Siegfried entered the service of the Foundation of Jewish Labour in September 1936 and started work as an accountant and administrator in the Werkdorp. In the Work Village he met Gerda Bergmann, who had also fled from Germany. 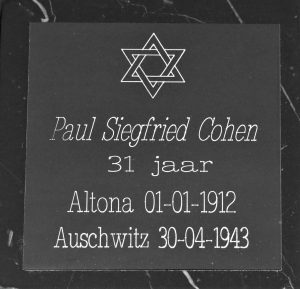