Rudolf Raphaelson was born on 4 April 1922 in Berlin. He arrived at the Werkdorp in November 1937. He was trained as a carpenter and worked there as a joiner. Rudolf met Lotte Neumond, they fell in love and planned to marry after the Werkdorp was evacuated on 20 March 1941. Their intended marriage did not take place. They were both put on the transport list of 31 August 1942, but Rudolf evaded it.

By the end of July 1942 Rudolph tried to cross the border from the Netherlands to Belgium with a group of 30 men and women. They were already on Belgian territory when they were arrested. They were handed over by the Grenzwachtregiment Cluver to the uniformed police in Tilburg to be handed over to the department of the ‘Sicherheitspolizei’ in Den Bosch. On 29 July 1942, this Grenzwachtregiment sent to the Devisen commando a large sum of money that had been stolen from the thirty Jews. This Belgian Devisencommando is a department of the German Ministry of Finance. Populated with customs officers and primarily specialised in confiscating foreign currency, the service had over time become more and more involved in the persecution of Jews. They were well aware of the motive of the fleeing Jews, namely fear of impending deportation. At the time of his arrest Rudolf was carrying Dutch and Belgian money, the equivalent of a few hundred Reichmarks. This money was confiscated by the German services on the basis of so-called objective procedures, which amounted to theft from the government. This is justified by the arguments that Rudolph intends to travel to France and that he has already lost his status as a regular legal subject by being handed over to the Gestapo (sic). The thirty Jews, including Rudolph, were first taken to Haaren camp. From there they were forwarded to Auschwitz. Rudolf was transferred to Blechhammer camp, a sub-camp of Monowitz.

From tradition, the following testimony was given by a fellow prisoner Israel J. Rosengarten about Rudolf:

“Raphaelson was a ‘kapo’, which meant that he had certain privileges and a position of leadership in our barracks over other Jews. He also had a position of trust. In the summer of 1944, Blechhammer was bombed regularly. This Kapo saw an unexploded bomb lying on the ground. The bomb contained a yellow powder -dynamite- and he wanted to take the yellow powder with him. While he was scraping the powder, he was caught by an SS man. The ‘Kapo’ was beaten until he collapsed. He was then accused of looting dynamite with the intent to commit sabotage. It was considered an act of terrorism against the Third Reich. But the SS let him go.

The position of Kapo was not taken away from him, he stayed and did not go to a punishment department. A month passed until one day everyone returned from forced labour and the camp leadership was dressed as if it were a holiday. No one was allowed to return to the barracks and had to go to the centre of the camp where a gallows was set up. The Auschwitz leadership decided that the saboteur should pay for his crime. And after a long wait, the execution took place. The chair under the gallows was kicked away, the rope didn’t hold and it snapped. And Rudolf fell to the ground. The SS ordered the rope to be repaired and Rudolf was placed back on the chair. The unthinkable happened, the rope snapped a second time. And for the third time, the gallows were prepared. Rudolf seized the opportunity to shout: “Friends, do not lose heart. Those who kill us today will soon be kaputt”.  After Rudolf was killed, the six thousand watching prisoners had to stand for another 15 minutes.
Rudolf Raphaelson was murdered on 31 August 1944. 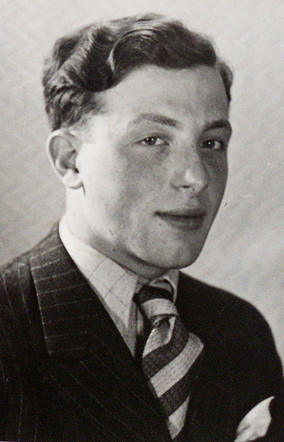