Siegfried Bauer was born on 15 September 1922 in Breslau. The Brauer family lived at 38 Langegasse. They moved to Berlin in the early 1930s. His younger brother Heinz (1923) fled with his parents on 18 April 1939 via Bremerhaven to Shanghai. From there they left for the U.S.A. All three survived and died in the 1970s, his brother in Montreal in March 1978, his parents in San Francisco, the mother dying in 1976 and the father three years before that.

Siegfried fled to the Netherlands at the end of 1938. He is placed in the Dommelhuis at the end of February 1939 as a 16-year-old and is then attributed with “imbalance of mind and insufficient adaptability, but also an already mature spirit, diligence and accuracy in his work” with a great influence on his fellow pupils. Within a month, he was gone.

At the end of 1939, he gets a place in the Work Village. He worked there as a farmer. After the Werkdorp was evacuated on 20 March 1941, he returned from Amsterdam to Wieringermeer.

Siegfried spent a number of weeks ‘in hiding’ with the Meeuwsen family, that is how the family always described it.

“He came into my mother’s shop, I don’t want to go to Germany. The Jews were no longer allowed in Wieringerwaard, which fell under the ‘coastal area’, so more came to Slootdorp. Then you have to go into hiding,’ he said, ‘where? Where did Mother say: “Here in my house, but stay behind the house. Because there are Germans walking in front of the house”. He lived in our house, he went to church with us a few times.

I think he was with us for about 3 weeks, then he was gone. He left a crucifix and a note saying that his father did not want to put a whole family in danger and that he should report to the Germans, work in a factory in Germany and then survive the war. Mother received a beautiful drawing of him from Westerbork and for the rest she heard nothing from him. Unfortunately, everything was drowned when the polder was flooded. So we have no proof anymore.”

Back in Amsterdam from the Wieringermeer, Siegfried was arrested on 2 May 1941. Immediately the next day at 7.21 am he is taken by train to Westerbork by two policemen. When the Westerbork refugee camp turned into the Durchgangslager Westerbork on 1 July 1942, Siegfried was among the old camp inmates. He managed to obtain a sperr and in July 1943 he even obtained a Palestine declaration, so that for the time being he did not have to be transported.

Then 18th January 1944 arrived and he had to be transported to Theresienstadt. He managed to stay in camp Westerbork for two and a half years without being transported. In September 1944, he was further transported to Auschwitz. On 27 January 1945, Auschwitz is liberated. Siegfried lived to see the liberation, but died a month later, on 28 February 1945, at the age of 22, because of all the hardships he had to endure. 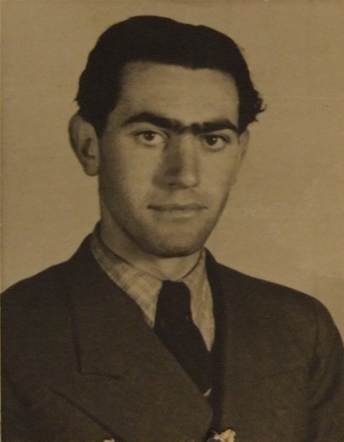